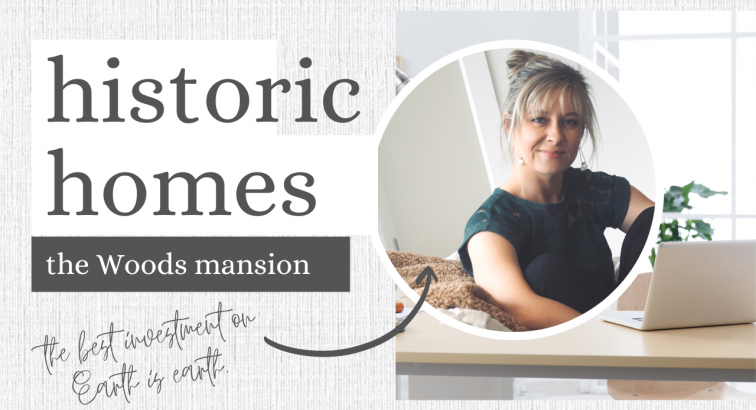 Share   Tweet   Pin   Email
In 2018, at the beginning of my Real Estate career, I took time to explore our city and wrote a series of articles featuring the Historic Homes of Lincoln, NE. Having started out in Architecture, the historic homes and the stories they could tell felt like the perfect place to start my journey into our Lincoln Real Estate market. I met some wonderful people and I was so happy to share their memories, and the history of these homes. This was my passion, and how I fell in love with Real Estate. Let me share it with you.
The Woods house was built in 1915-1916 for Frank and Nelle (Cochrane) Woods.
The Woods family had a high degree of influence on Lincoln, NE and enriched our history. Just driving down a major street you will notice that the name Woods is prominent and well known. From the iconic Woods Bros, to Woods Park and Woods Blvd, the family name has survived the test of time, and for good reason. The Woods brothers were Frank (1868-1952), Mark (1870-1956) and George (1873-1957) and with their father, Col. F.M. Woods (1844-1928), developed over 50 subdivisions in Lincoln from the late 19th through the mid 20th century. They founded Lincoln Telephone & Telegraph Co., Woods Aitken Law Firm and an Airplane Factory. Gifting to the community Woods Park, they also established the Woods Charitable Fund of Lincoln as well as Chicago, launched the Lincoln Community Foundation, and the Woods Art Building at UNL was funded by Frank Woods to memorialize his wife Nelle. Woods was said to be one of the wealthiest men in Lincoln in the 1st half of the 20th century.
The Woods house was built in the Italian Renaissance Revival Style designed by the Chicago architect Paul Hyland. Hyland also designed such major buildings in Lincoln as the Terminal Building, the McAffee house and the First National Bank Building.
The Woods house is located at 2501 Sheridan Blvd on 2.9 acres. It is two and one half stories with 8 bedrooms and 6 bathrooms and is 7807 sq. ft. It has a 3 stall garage with a chimney because the garage also houses the boiler for the house. The interior finishes are in the neoclassical style and feature beautiful marble fireplaces and painted glass. As you walk in the main entry hall you see the large staircase with maple treads and a cast iron railing. Off the front entry there is a library and ½ bath. The large open living room extends the full depth of the house and features a player pipe organ positioned in the southwest corner of the living room. This organ is no ordinary organ, it is an Aeolian Duo Art player pipe organ. The organs console is found in the living room, it’s pipes are encased behind tapestries at the landing to the second floor and the motor and service are located in the basement. A rare organ in Nebraska, the only other was in Josyln Castle in Omaha, NE but no longer operates. The large sunroom contains hand painted windows and a working fountain. A formal dining room, as well as a breakfast room complete the main level. On the second level you will find the bedrooms, all 8 including a master suite with a private bathroom and French door access to the south balcony. The attic includes a ballroom and a large walk in cedar closet. The house also contains a 2 story service wing with a kitchen and servants quarters. It was built with a high degree of integrity and used materials that mirrored that quality. The exterior of the home has been well preserved and the stucco remains unpainted and retains the original tile roof.
The grandeur of the property did not stop at the house, the landscape architect Jens Jensen of Chicago designed the grounds for the Woods Mansion, as well as the layout for the entire Woodscrest subdivision. Such features of Jensen’s work are the naturalistic pond, and stepping stone paths. The “open field” grass area in the backyard and the original brick driveway.
The Woods family lived in the house until they passed in the 1950’s. The current owners, the Hruza’s, purchased the home in 1986 after the unexpected death of their son David. In 1985, when the Woods House was up for sale, David urged his parents to buy it. Him and his mother dabbled in remodeling and restoring and he was looking for a renovation project they could do together. After making an offer that was refused they had moved on from the home. But after the passing of their son they decided to purchase the house in his memory. After a while they began restoring the home to it’s original beauty. Going through each room sanding, striping and scrubbing. Finding the work therapeutic and finding peace in honoring David this way. The Hruza’s are responsible for unearthing the original stepping stones and pond that Jens Jensen had created long ago and restoring the Aeolian organ to full operation. I think it’s safe to say that under the current ownership this Historical Home has been restored and the unique features that may have otherwise been lost, have been brought to life. Thank you David, Joan and Tom Hruza.
Click for video: https://youtu.be/ivIECrEQAPM
Share   Tweet   Pin   Email