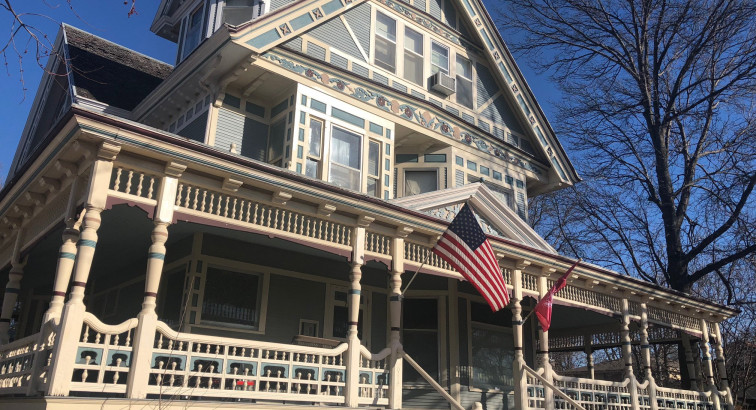 After starting the Historical Homes series, I had a neighbor and friend, reach out to me to be a part of my next Historical Home. Joel Zinnecker, this article couldn’t have been near as perfect without you! I appreciate so much the time you took to get the permission and take me through the house so I could get the pictures, and the story I needed to share this home with everyone!

The Harris House is located at 1630 K Street, built in 1900-03 in the Neo-Classical Revival Style for Sarah Harris, widow of George Harris. The home was originally built in 1872 located at about 1610 K Street. It was smaller and was occupied by the Harris family when they moved here from out East. After her husband’s death, Sarah built an addition around their then current house creating the large 2 ½ story Harris house that stands today.

In 1918 the Alpha Tau Omega fraternity moved the house from the northeast corner of 16th and K east to it’s current location of 1630 K Street. The corner lot was then sold to the First Christian Church. In 1935 the fraternity sold the house and it became a private residence again before being divided into 13 apartments. The house was remodeled in 1984 becoming a mix of shops and offices, now being used exclusively as offices.

George S. Harris was a railroad land agent that made his way west. As the railroad would gain large amounts of land through government grants, parts of the land not used for the railroad were sold to finance construction and build up population around the railroad that in turn would use the railroad.

George Harris arrived in Lincoln, NE on July 24, 1864. He was to establish a land office for the Burlington & Missouri River Railroad. It was said he sold over 100 acres of railroad land to immigrants from 1869-1974 & 360,000 acres in Nebraska and Iowa for Burlington.

The Harris family was largely responsible for many improvements and developments in Lancaster County. When the Congregational Church requested 600 acres of land in Crete, Harris helped to get the Burlington’s land gift that created Doane College. The Harris’ also had 2 sons. One went on to be the president of the Chicago, Burlington. The other, John F Harris, attended UNL and oversaw the purchase of 500 acres for the Nebraska State Hospital later adding another 100 acres and giving it to the City of Lincoln, which he named Pioneers Park. In 1955 the new “O Street Bridge” was dedicated as the Harris Overpass in the Family’s honor.